GIANTS
BY JOSE RIVERA
​
​“We are all common man, but if your dreams are larger than life
you will forever be forever, Giants”. 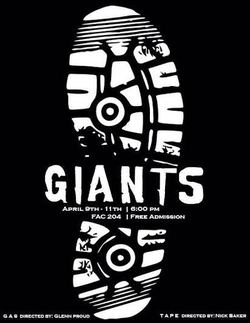 PRODUCED BY EDDIE ELLIOT
DIRECTED BY GLENN PROUD & NICK BAKER
FEATURING EDDIE ELLIOT, ERIC LONG, & JORDAN REED
UMASS AMHERST: APRIL 9-11, 2015
​
​Giants is comprised of two one-act plays: Tape and Gas, which are part of a larger work titled  The Giants Have Us in Their Books. Rivera was inspired by his daughter who surmised that if we put monsters in our books, then we must be in theirs. Tape and Gas provide snapshots of life with sharp commentary on contemporary issues of race and politics. 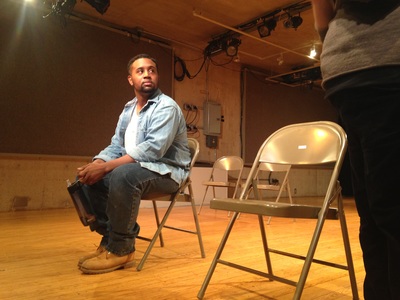 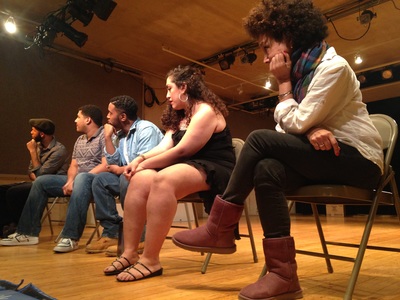 ARTISTIC STATEMENT: EDDIE ELLIOT
For all those who seek change and embrace diversity of all kinds, this is dedicated to you. As a student and advocate for social change, I often find myself questioning a lot of things. Most recently I noticed the under-representation of students of color in the theater department, namely in the lack of diversity in our casting practices and in selection of plays produced in our season. I have chosen to address this gap by producing Giants, and I hope to inspire a new league of outcasts who will work against our invisibility in this department, on this campus, and in the world around us.

My name is Eddie Elliott and I am a Giant. I wanted it to be known that I was not there to fill a quota, I did not come to take a seat, nor did I just want the prestige that comes with the name. I arrived with the intention to add to and exercise my skills as an Artist, Scholar and Citizen. Although, Giants started as a defiance act, it grew into something larger. In all honesty, I just wanted the same opportunities my peers received. I wanted to have late rehearsals and the passionate-frustration of needing to explore your emotions deeper so the audience can feel it as well. I guess you can say I wanted to be normal. But I felt the show selections and audience did not reflect or consider me, a strong, black male. Being the only male of color in my graduating class had its own pressure, I expressed to an instructor I felt alone, and as she began to sympathize, I decided then and there I wanted to change the climate and culture of the department, I wanted to produce my own show by and for students of color. I knew I wanted to showcase works by a playwright of color and fully implement colorblind casting. I asked one of the most artistic student directors and a gifted graduate student who agreed to help me and we worked and worked.

For six weeks straight we rehearsed, I chose to advertise in places that theater flyers were not frequent. Then, I turned to social media, word of mouth and R.S.O.’s  (Registered Student Organizations) and then it was showtime. The first night was amazing everything flowed effortlessly and there was a facilitated talk back that helped drive the points home. Each night the audience grew in numbers so by the final show we had a full house that included everyone; faculty, students, student athletes and even a member from administration. I felt I made my point, I did not come to satisfy the quota. For my efforts I was awarded the Franklin Prentice Rand Scholarship in Drama for outstanding achievement in the areas of Producing as well as having my name added to The Denise Lessard Wagner Community Spirit Award which recognizes students that have made an outstanding contribution to the community by demonstrating dedication and commitment. I am grateful for my achievements but more importantly, I hope to inspire the next voice that will implement change. “We are all common man, but if your dreams are larger than life you will forever be forever, Giants”.