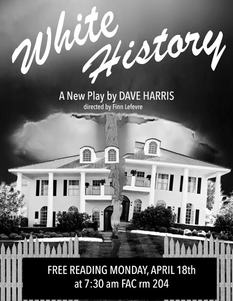 APRIL 2016
WHITE HISTORY by Dave Harris
Produced by Finn Lefevre, Claudia Nolan & Gaven Trinidad
Our understanding of race is changing. Today, we have a vocabulary that did not exist fifty or even fifteen years ago. "White privilege" and "white culture" were nonexistent. Everything was framed within a context of "other." Of not white. Of not normal. Of not human. Today, whiteness is becoming something tangible. With tangibility, it becomes deconstructable.  Dave Harris' White History explores the ways in which we understand and don't understand race. The ways in which even the phrases Black, white, African American and white American fail us today.
UMass Amherst: April 18, 2016
Learn More 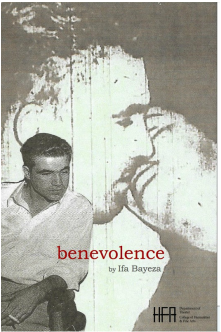 MARCH & APRIL 2016
BENEVOLENCE by Ifa Bayeza
Directed by Ifa Bayeza
Featuring Christine Hicks & Ryan Jacobucci
“Benevolence,” written and directed by Ifa Bayeza, is the second drama in Bayeza’s “Till Trilogy.”  While her first play, the Edgar Award-winning “Ballad of Emmett Till,” tells the story of the youth himself in the last two weeks of his life, “benevolence,” in a series of short plays, explores the saga from the perspective of the people in the MS Delta. This segment introduces Caroline Bryant, her husband Roy and his twin brother Ray, the August morning before her encounter with Emmett; the following Saturday, the night of his abduction; and in the aftermath of the trial.
UMass NY POP: February 28-February 29, 2016
UMass Amherst: April 8-9 & April 15, 2016
Learn More 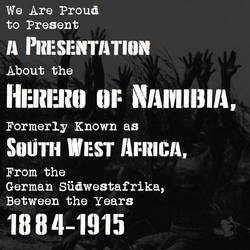 FEBRUARY 2016
WE ARE PROUD TO PRESENT... by Jackie Sibbles Drury
Directed by Jennifer Onopa
Featuring Nick Baker, Sarah Etkin, Kyle Hartmann, Sabine Jaques, Anderson Lara and Miguel Angel Paredes
A group of actors gather to tell the little-known story of the first genocide of the twentieth century. As the full force of a horrific past crashes into the good intentions of the present, what seemed a far-away place and time is suddenly all too close to home. Just whose story are they telling?
UMass Amherst: February 18-19 and 25-27, 2016 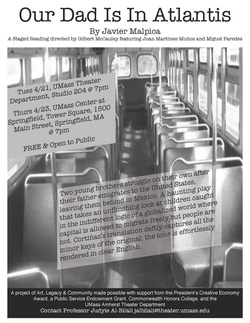 APRIL 2015
OUR DAD IS IN ATLANTIS by Javier Malpica
Directed by Gilbert McCauley
Featuring Juan Martinez-Munoz & Miguel Angel Paredes
Two young brothers struggle on their own after their father emigrates to the United States, leaving them behind in Mexico. A haunting play, written in direct and winsome language, that charms even as it sets us up for a devastating emotional impact. Javier Malpica has made an end run around polemics and written a play that takes an unflinching look at children caught in the indifferent logic of a globalized world where capital is allowed to migrate freely but people are not.
UMass Amherst: April 21, 2016
UMass Springfield: April 23, 2016
Learn More 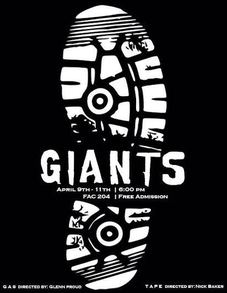 APRIL 2015
GIANTS by Jose Rivera
Directed by Glenn Proud & Nick Baker
Produced by Eddie Elliot
Featuring Eddie Elliot, Erik Long and Jordan Reed
Giants is comprise of two one-act plays: Tape and Gas, which are part of a larger work, The Giants Have Us in Their Books. Rivera was inspired by his daughter who surmised that if we put monsters in our books, then we must be in theirs. Tape and Gas provide snapshots of life with sharp commentary on contemporary issues of race and politics.
UMass Amherst: April 9-11, 2015 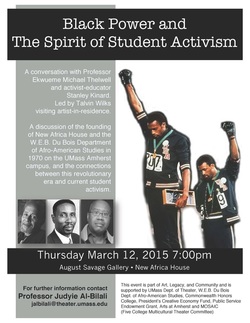 MARCH 2015
﻿​﻿
BLACK POWER AND THE SPIRIT OF STUDENT ACTIVISM
Hosted by Artist in Residence Talvin Wilks
Featuring Ekwueme Michael Thelwell & Stanley Kinard
A conversation with professor emeritus Ekwueme Michael Thelwell and alumnus Stanley Kinard. Talvin Wilks, visiting artist in residence, will lead the talk that will focus on the founding of New Africa House and the W.E.B. Du Bois Department of Afro-American Studies in 1970. The trio will also draw connections between the successes of that revolutionary era and the growing student activism both on campus and across the nation today.
UMass Amherst Augusta Savage Gallery: March 12, 2015